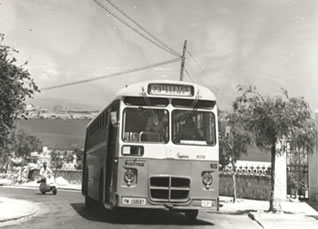 The history of public passenger transport in Palma began with the foundation of the Sociedad Mallorquina de Tranvías (Majorcan Tram Company) that initially used twelve trams bought in Liverpool that were pulled by mules.
In 1914, and with the creation of the Sociedad General de Tranvías Eléctricos Interurbanos de Palma SA (Palma General Inter-Urban Electric Tram Company), the service was modernised with 42 electric trams that were to continue working until 1958, when, with the help of Palma Council and other public institutions, the trams were replaced by 53 brand-new buses with greater capacity and flexibility.
In 1971, the Sociedad General de Tranvías went bankrupt and the employees themselves created the Sociedad Anónima Laboral Mallorquina de Autobuses (SALMA) (Majorcan Bus Company Ltd), that took over the urban and inter-urban transport services from the previous company.
In 1985, Palma Council municipalised the passenger transport service that SALMA ran and constituted the current Empresa Municipal de Transports Urbans de Palma, SA – EMT-Palma (Palma’s Municipal Urban Transport Company).
Since its foundation, EMT-Palma has focused on the public urban and inter-urban transport of passengers with their origin or destination in the city of Palma or its surroundings.
In 1985, EMT-Palma transported 20 million passengers on its 16 urban bus routes and 1,650,000 passengers on its 4 inter-urban routes, covering 6,650,000 km.
During the decade between 1985 and 1995, the Company focussed its efforts and resources on the expansion and modernisation of the public transport network, managing to establish a total of 31 urban and inter-urban transport routes during the first decade of the 21st century. The results of the expansion and modernisation effected translated in 2015 into 39 million passengers carried and almost 13 million kilometres travelled.
The operational results of the Company over these recent years and the growing demand by residents for a greater reach and quality in the public transport service have forced EMT-Palma to carry out a constant updating of its structures providing public transport to the city of Palma, permanently adapting itself and offering a public transport service in keeping with the requirements of today’s residents.